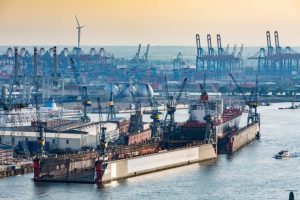 A storm is brewing in the city of Hamburg over the port authority awarding the development of the 42ha Steinwerder South container terminal project to a Chinese conglomerate.

Hamburg Port Authority (HPA) launched an ‘ideas’ competition in January for the development of the redundant area on the south side of the city to include up to 1,100m of quay wall to accommodate ultra-large container vessels (ULCVs).

China Communications Construction Company (CCCC) is the parent of the global market leader in container gantry cranes, ZPMC, and is one of the 500 largest companies in the world, with investors including Chinese internet billionaire Jack Ma, founder of Alibaba.

The news that home-grown entries had been overlooked has shaken the Hamburg shipping fraternity – a reminder of the reaction when Singapore’s Neptune Orient Lines attempted to acquire Hapag-Lloyd in 2008.

He demanded a “clear plan” for the tender, which he insisted must be carried out “very quickly”, claiming HPA’s competition had already led to delays in the use of the area.

The port’s biggest container terminal operator, HHLA, and the Hamburg port employers’ association, UVHH, have reacted strongly to the announcement, with the former insisting that it would be “more cost-effective” to use existing capacity reserves rather than build a new container terminal.

And UVHH described the decision as “incomprehensible”, as the HPA’s own port plan had estimated there was still plenty of unused capacity in the port’s existing facilities.

Among many other reactions today, Olaf Merk, head of the OECD’s ports and shipping sector, said in a tweet: “China will get a container terminal in Hamburg? When will German operators get a majority stake in a terminal in China?”

Second place in the ideas competition went to the C Steinweg Group, with a proposal for the development of a shortsea terminal at the site.

Hamburg surrendered its number-two North Europe ranking to Antwerp as ocean carriers operating ULCVs have been frustrated by the procrastination of the Elbe deepening project. In the first quarter of the year, Hamburg recorded a throughput of 1.9m teu, representing virtually zero growth on the same period of the previous year.

“Despite the persisting non-implementation of the dredging of the fairway of the Lower and Outer Elbe, cargo still finds its way via Hamburg,” explained Ingo Egloff, joint CEO of Port of Hamburg Marketing, in May.

Carrier sources tell The Loadstar they have generally “learned to live with the Hamburg restrictions”, but complain bitterly of the extra costs per voyage the draught problems cause.

Weight was a factor in the export booking crisis that hit North Europe to Asia and Middle East shippers in March and April, when vessels leaving other ports were sailing ‘light’ and leaving export cargo on the quayside due to the clearance restrictions in the Elbe