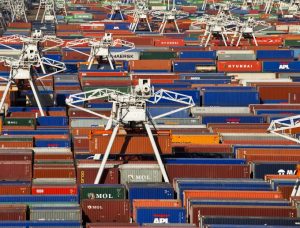 Container spot rates held steady this week, but they will finish 2017 significantly below the levels of a year ago, potentially diminishing carrier hopes of anything other than modest annual contract increases.

The Shanghai Containerized Freight Index (SCFI) was effectively unchanged from a week ago, with spot rates from Asia to North Europe at $800 per teu and at $596 per teu for Mediterranean ports.

Nevertheless, with the spot rate erosion witnessed since October now stabilised, carriers do not seem overly concerned at the lower market rate base as they enter contract talks, according to the view of one UK line manager.

He told The Loadstar this week his feedback “from the field” suggested he would obtain “satisfactory” increases from key Asia clients in the coming weeks.

“The rate bar was raised this year,” he said. “We have no intention of lowering it.”

Moreover, he anticipated a fresh rate spike ahead of the Chinese New Year holiday factory shut-downs in mid-February.

Latterly, there has been less of a connection between spot and contract rates as a two-tier level of short-term rates seems to have emerged.

In fact, several forwarders and NVOCCs have told The Loadstar this year that, while they still enjoy “very low” short-term rate deals with a number of carriers, these now run in tandem with what the market terms as ‘VIP’ rate agreements that offer protected space guarantees.

Also, The Loadstar understands, some Asia-Europe annual contract rate negotiations could be put on hold pending the completion of the merger of Japanese carriers K Line, MOL and NYK.

Indeed, the new entity, ONE (Ocean Network Express), has said it would only “participate in the bidding process” for contract cargo from April, which suggests that current annual contracts with shippers agreed by the Japanese trio will be extended.

Meanwhile, a general improvement in backhaul rates has provided a welcome bonus for carriers this year. According to Drewry’s World Container Index (WCI), spot rates from Los Angeles to Shanghai are up 5% year-on-year, with rates from New York ahead by 9%.

But the star of the show is North Europe, with the WCI recording a 35% year-on-year hike in Rotterdam to Shanghai spots.

Carriers recorded even higher gains earlier in the year, following a capacity crunch in March and April, which resulted from temporary network changes ahead of the realignment of the alliances, and they have managed to hold onto much of the gains even after export schedules were resumed.