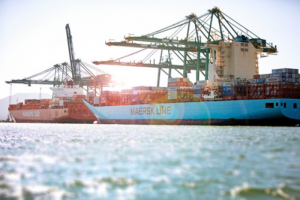 Following the completion of Maersk Line’s $4.4bn acquisition of Hamburg Süd on 30 November, the Latin American specialist could see its fleet reduced significantly due to regulatory restrictions on the deal.

Alphaliner said “at least” 25 vessels currently deployed by Hamburg Süd, with a capacity of some 200,000 teu, “will be affected by the impending service terminations” demanded by jurisdictions that granted approval to the takeover.

According to vesselsvalue.com Hamburg Süd operates 47 owned vessels for a total capacity of 322,802 teu, but including chartered in tonnage the number is approximately 100 ships.

Maersk was required to obtain regulatory approval in 23 jurisdictions, with the final green light being obtained from the Korea Fair Trade Commission on 28 November – a year after the deal was originally announced.

However, the conditions imposed by the European Commission and Chinese regulators have been viewed in the industry as “particularly tough”.

In April, Maersk received clearance for the takeover from the EC, conditional on the termination of Hamburg Süd’s participation from five tradelanes servicing EU ports, leading to the withdrawal of eight ships.

Furthermore, Maersk had to agree not to enter into any additional VSAs or alliance arrangements on the Asia-South America trades within five years following the acquisition, and additionally had to reduce its combined reefer slot capacity share between Asia and Latin America from the current 45-50% to 34-39% within 90 days of closing the deal.

Maersk was also obliged to sell its Brazilian cabotage subsidiary, Mercosul, to rival CMA CGM in order to gain approval from the Brazilian regulator, CADE.

Given these concessions, which will see the service changes and terminations happen over the next half-year, and not least the uncertainty created during any acquisition, which is already seeing competitors targeting both Maersk and Hamburg Süd customers, the two lines have made a big pitch in reiterating that the iconic German brand will remain “commercially independent” for most functions.

“Hamburg Süd to remain Hamburg Süd,” says the German line’s website, and executives have pledged that the “familiar red vessels” will remain – although fewer in number, it seems.

Meanwhile, Maersk says it anticipates cost synergies of $350m-$400m annually from the merged operations, which compares with Hapag-Lloyd’s $435m expectations after the merger with UASC and CMA CGM’s $500m target following the takeover of APL.

Interestingly however, Alphaliner noted that the takeover of Hamburg Süd, which deployed around 75% of its capacity on Latin America trades, will see that trade become the single biggest route by capacity deployed, of the merged businesses, taking over from Asia-Europe for the Danish carrier.