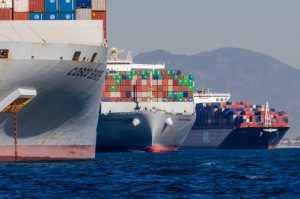 Carriers are becoming more innovative in the services they are offering the market, as setting
themselves apart from peers in a commoditized business becomes the new way forward.

Striving to differentiate services in an increasingly commoditized business is testing the
imagination of container shipping executives and leading to a range of new offerings from carriers
that range from faster ocean transits, booking guarantees, and fixed prices to further integrating
landside logistics into the supply chain.
The array of offerings stretches across all major trades, with the Ocean Alliance announcing the
deployment of what it calls its Day Two Product incorporating 41 services across seven trades,
Maersk Line expanding its online platform to China-Mediterranean shippers, and APL informing
the market that it will extend its Eagle Guaranteed premium services to the trans-Atlantic and
Asia-Oceania networks.
These new services follow Hyundai Merchant Marine’s re-entry into the Asia-Europe trade with
the Asia Europe Express (AEX) in April launching the fastest Busan-Rotterdam transit in the
market (by one day, at least). HMM already operates a premium service on the trans-Pacific that
charges 10-20 percent higher rates for faster and guaranteed service. Since those services
connecting Asia with the US West Coast began in May, the carrier had handled 10,000 TEU by
Seeking differentiation, carriers launch faster, guaranteed services
the end of January.

Also offering a speedy service, this time on the trans-Atlantic as volume grows, is Mediterranean
Shipping Co., which has revised its schedule for Mediterranean-US East Coast ports, cutting up
to four days off the journey.
It is now one year after the revamped carrier alliances were launched, and shippers remain
unconvinced about the service offerings. Common complaints include poor schedule reliability, a
lack of choice with fewer carriers and alliances, and more transhipment because of fewer direct
port calls.
Anxious to improve service levels and set themselves apart from peers after returning to
profitability in 2017, carriers have become more open to trying new strategies and investing in
digitalized solutions. Maersk Group said earlier this year that it plans to become a global
integrator of container logistics using its logistics unit Damco, Maersk Line, and port operator
APM Terminals to provide a one-stop-shop for shippers.
Ocean Alliance member CMA CGM Tuesday announced that the carrier and its subsidiaries will
offer customers land solutions and logistics in each of the countries where they have a presence.
The offer will include road, rail, and inland waterway options, giving shippers a solution that
integrates the supply chain and even allows door-to-door services.
Another of the Ocean Alliance carriers, Cosco Shipping Holdings, has been pushing an
integrated strategy of its own for the last couple of years with increasing assertiveness. China’s
largest shipping company has continued to aggressively expand into landside logistics, building
on Beijing’s Belt and Road strategy to grow its terminal and inland footprint in Asia and Europe.
Earlier this week, Maersk Line announced an extension to its online platform,
ship.maerskline.com, that will include China-based shippers exporting to all Mediterranean
destinations via Shanghai, Ningbo, and Qingdao, the carrier’s latest move to tackle the longstanding
industry problem of container no-shows and cancellations.

The wider service scope of the Maersk platform will be added to its current three North China
ports (Qingdao, Xingang, and Dalian) that serve West Africa, South Africa, and east coast South
America. The offering will be available for customers located in China who place bookings either
directly or through a booking agent.
Silvia Ding, Maersk Line senior vice president and head of trade management, said the digital
service offered by the carrier ensured a commitment from shipper and carrier at the time of
booking by providing a secured space and container.
“It also provides competitive and fixed prices, which give customers a stable service delivery.
Through the steady volumes booked per week on this platform, we are happy to see that our
customers are embracing the increased transparency in pricing and visibility of service delivery,”
she said.
No-show payment seen addressing business liability
Booking cancellations and no shows has been a challenge for the shipping industry for years,
and with the new online model, Maersk Line aims to reduce downfalls through customer
commitment via a no-show payment.
“The mutual commitment is also a great benefit for us, as we get new market insights and have
managed to reduce downfall significantly on our digital platform. This allows us to improve our
planning and vessel optimization, which ultimately enhances the customer experience,” said
Silvia.
The in-house attempt to combat no-shows comes as Maersk Line starts to offer enforceable
Seeking differentiation, carriers launch faster, guaranteed services

contracts through the New York Shipping Exchange, a company that offers a platform where
containers booked with a carrier but not actually showing up for loading can result in penalties for
shippers, while shippers will be compensated for containers being rolled by carriers.
APL is extending its Eagle GO. Guaranteed program to the trans-Atlantic and Oceania routes
where customers will pay a surcharge to participate and get a 100 percent refund if the carrier
fails to meet the delivery date. The expansion of the program from April 23 means that shippers
who pay the premium rate will be guaranteed equipment and vessel space on six services to the
United States from 17 European ports and seven to Australia and New Zealand from 15 Asian
ports.
The announcement comes 14 months after APL launched the Eagle program with a portfolio that
also includes Eagle Reach Guaranteed, which promises “day-definite” arrival of containers to six
intermodal railyards: Chicago; Columbus; Dallas; El Paso, Texas; Kansas City; and Memphis.
Another service, Eagle Get Guaranteed service, assures an “expeditious discharge of cargo” —
within 12 hours of cargo operations starting — from the ship.
Calvin Leong, chief trade officer of APL, said, “APL now provides more options for guaranteed
space and equipment in all seasons for our customers’ most demanding, time-sensitive, and high
volume cargoes.”