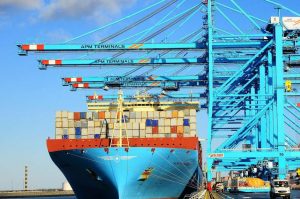 Danish shipping and energy conglomerate Maersk Group has set sights on achieving internal synergies of USD 600 million by the end of 2019, the company revealed on the occasion of its Capital Markets Day.

The objective is being made as the group transforms from a conglomerate to an integrated logistics company focused on container shipping, ports and logistics.

One of the key priorities to continue driving the synergies would be further bolstering of volume from Maersk Line and Hamburg Süd in APM Terminals, especially as Hamburg Süd moves its volume from third-party terminals to APMT.

The German liner’s integration into the group is anticipated to contribute to synergies worth up to USD 400 million by 2019, according to Maersk.

Aside from winning more volume and Capex discipline, Maersk has also decided to raise cash from its underperforming terminals.

These will, in particular, relate to the selling of minority shares in high-value terminals which provide an opportunity for the company to optimize its portfolio of 74 terminals worldwide.

Furthermore, there will be no new greenfield terminal project investments as considerable financing is required to complete the construction of the existing five terminals under implementation.

These include projects in Moin in Costa Rica, Tema in Ghana, and TM2 in Tangier which are set for opening in 2019 as well as Vedo in Italy and Abidjan in Ivory Coast which are to set to start operations in 2020.

Despite the major impact of the cyber attack from last year, Maersk continues to believe in digitalization and benefits it will bring to its business. These include improved customer experience, cost and productivity gains as well as data monetization. Nevertheless, considerable investments are being assigned to cyber security.

To that end, Maersk has teamed up with IBM to establish a joint venture aimed at offering a global trade digitization platform by using blockchain technology.

Moving forward the group wants to retain its investment grade status as it moves to complete separation of its energy business, the proceeds of which are set to be distributed to shareholders.

Finally, as of the first quarter of 2018, Maersk plans to report one profit and loss statement and EBITDA guidance as its energy business is reclassified.

Hence, the disclosure from the Q1 2018 will include the following segments:

In its guidance for 2018, Maersk expects its EBITDA to range between USD 4-5 bn and its underlying result to be above last year standing at USD 365 million.