B2L-CargoCare.com > News > Air Freight > Is HMM ready to go it alone between Asia and North Europe?

Is HMM ready to go it alone between Asia and North Europe? 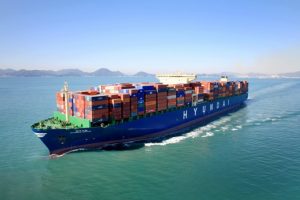 A spokesperson for Hyundai Merchant Marine (HMM) has told The Loadstar that the carrier is “still reviewing” the launch of its new Asia – North Europe (AEX) express service slated to start in early April.

One industry contact said today he thought that the South Korean carrier had “little option” other than to try to deploy its own tonnage on the route as it would be increasingly finding that its limited operational control as a slot charterer was putting it at a commercial disadvantage.

“It will be seen as a positive statement of intent to its loyal Korean customer base,” he said.

Meanwhile, Alphaliner has published details of HMM’s new loop which will operate outside of its ‘strategic cooperation agreement’ slot charter with the 2M alliance partners Maersk Line and MSC.

The consultant said that the new AEX service will turn in 10 weeks and deploy 10 classic panamax vessels of 4,700 teu.

It said that the first sailing of the AEX is scheduled from Busan on 7 April and would call at Shanghai, Ningbo, Kaohsiung, Yantian, Singapore, Colombo, Rotterdam, Hamburg, Felixstowe, Singapore, Hong Kong and then back to Busan.

However, HMM said that it had yet to finalise the ports of call for the service.

Commenting on the launch of the new AEX service by HMM, Neil Dekker, consultant at ClipperMaritime, said: “Running the service with small vessels puts the carriers at a cost disadvantage, but HMM’s plan will be to fill the ships to a maximum 100% load factor.”

Mr Dekker continued: “Headhaul volumes have been strong in the run up to the Chinese new year, but it is unknown how quickly they will recover by the time HMM launches the AEX string.”

He noted that there was “the possibility of short-term rate volatility” from the launch of any new service but opined that the addition of a small loop to the Asia – North Europe trade was “unlikely to cause major damage to the overall supply / demand balance”.