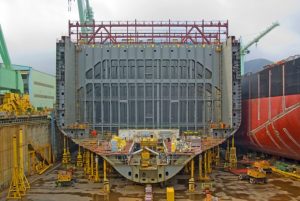 There will be a 5.6% growth in container fleet capacity this year, according to scheduled newbuild deliveries of 1.49m teu and expected in scrapping of some 350,000 teu, says Alphaliner.

After 2017’s slight supply-demand rebalancing, the pent-up flood of newbuild deliveries this year will be a challenge for shipowners and container lines – especially if there is a dip in demand.

And notwithstanding a softening of demand and seasonal fluctuations, analysts cited higher oil prices and increased protectionism as additional threats to demand growth this year and next.

Alphaliner noted that orders placed in 2017 were up a massive 140% on the previous year, to 671,641 teu, and expected a “marginal increase” this year as ocean carriers renew their newbuild appetite and take advantage of discounts and incentives from embattled Asian shipyards.

Indeed, some of the smaller liner players, such as Hyundai Merchant Marine (HMM) and Yang Ming, have made no secret of their intentions to place new orders on the back of improved trading in 2017.

HMM would “continue to consider ways of doubling our vessel capacity by 2022 [from the current 347,000 teu] including the launching of mega containerships.

“We achieved the 4m teu milestone in annual liftings in 2017, from 3m teu in 2016, as we successfully regained support from customers through our strenuous efforts to rebuild our credibility,” said Mr Yoo.

According to Alphaliner data, total global container capacity at the end of 2017 stood at 5,177 vessels for 21.1m teu – up 3.7% on the previous year in terms of cellular capacity, which compares with full-year demand growth estimates of around 4% to 5%, according to Maersk Line.

On 31 December, the containership orderbook stood at 345, equating to 2.67m teu, with much of this capacity concentrated in the larger vessel sectors.

Meanwhile, according to data compiled by London-based shipbroker Braemar ACM, there were a total of 153 containerships scrapped last year for 437,000 teu. This compared with 658,000 teu for 182 vessels in 2016.

Having been on a par with 2016 for the first six months of the year, containership owners were encouraged by unexpectedly strong demand and improving charter rates to reactivate their ships rather than consign them to the scrapyards. And Alphaliner’s idle fleet analysis finished the year showing 117 vessels in hot or cold lay-up, for some 416,000 teu, representing 2% of the global fleet.

This was its lowest level since early 2015 and significantly below the 400 unemployed vessels peak of mid-2016.