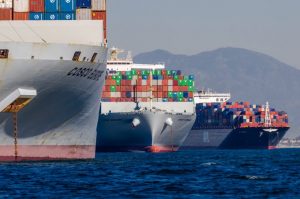 Container spot rates from Asia to Europe held up this week, while rates to the US were driven down.

According to the first edition, in the Year of the Dog, of the Shanghai Containerized Freight Index (SCFI), spot rates to North Europe improved by 1.2% to $916 per teu, while for Mediterranean ports, rates edged up by 0.8% to $797 per teu.

As China comes out of its Lunar new year holiday the general consensus of analysts, shippers and even the off-record comment of one carrier The Loadstar spoke to this week, is that east – west rates are heading south.

The only debate seems to be: by how much, and for how long?

“Although ocean carriers announced a 1 March GRI, expect it to have little or no impact on prices next month,” it said in a client briefing this week.

And noting that several carriers had told their customers of an extension of the validity for short-term rates until mid-March, Andrew Scorer, senior container pricing specialist at S&P Global Platts, said that according to its data, rates are already falling.

Mr Scorer said that spot rates for Europe had already lost $100 per 40 ft but there had been a “more drastic drop” on the transpacific, with rates tanking by $200 per 40 ft in the past few days.

Carriers are hoping that any dip in rates will be short-lived, given that the renewal of many annual contract rates, which account for about half of their liftings, are still to be negotiated with European shippers.

The Loadstar understands that carriers on the route have until now been reluctant to sign up to all-inclusive deals against a backdrop of rising fuel costs, and for their part shippers have been adopting a wait-and-see approach, specifically until after the CNY period.

Moreover, the merger of the Japanese carriers into the Ocean Network Express (ONE) from 1 April has also had an impact on Asia – Europe contract negotiations this year with K Line, MOL and NYK rolling over agreements that were due to expire at the end of 2017.

And the negotiating process is also about to start on the transpacific trade lane, so a softening rate scenario will not help the carrier negotiators to achieve decent rate increases.

Carriers need not only to obtain a satisfactory increase in freight rates but also to ensure that they have some buffer built in to cover any further increases in bunker prices.

At Maersk’s Capital Markets Day in Copenhagen this week it was revealed that Maersk Line’s average rate increase last year of $106 per FFE had almost entirely been exhausted by a $93 per FFE fuel cost hike.