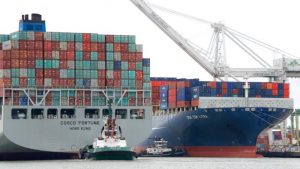 A 23% increase in containers lifted allowed Cosco to steal the top spot from Maersk Line in the third quarter.

According to Alphaliner’s liftings league table, the Chinese line loaded 23% more containers in Q3 than in the same period of 2016, whereas Maersk carried 2.4% fewer, its booking systems temporarily stymied by a cyber attack in the summer that caused a 12-day IT shutdown.

Maersk chief executive Soren Skou revealed that the carrier’s liftings in the first two weeks of July slumped as shippers booked cargo with its competitors.

Nevertheless, even allowing for a loss of say 200,000 teu, Maersk would probably still have been toppled from its long-held position as the biggest carrier by volume.

And adding soon-to-be-acquired OOCL, which carried 1.6m teu in Q3, suggests 2018 could see the Chinese liner as a permanent fixture at the top of the liftings league.

Even Maersk’s upcoming takeover of Hamburg Sud will only add about 4m teu a year to the total, and that figure could even be lower depending on the impact of the regulatory restrictions in certain trading regions.

Meanwhile, CMA CGM, which maintained its operating performance top position in Q3 with an ebit margin of 10%, is also challenging the once-untouchable Maersk Line on volume growth.

CMA CGM saw its liftings jump 11.6% year-on-year in Q3 to 4.98m teu, another new record for the French carrier. And its recent newbuild order of nine 22,000 teu+ ultra-large container vessels confirms its aggressive growth strategy under the new leadership of Rodolphe Saade.

Hapag-Lloyd sits behind CMA CGM in fourth position in Alphaliner’s liftings table, with 2.81m teu, but it is likely to be relegated next year when Japanese container lines K Line, MOL and NYK merge their total of about 3.6m teu into the Ocean Network Express (ONE) in April.

Apart from Hapag-Lloyd, which saw its year-on-year liftings surge by 44.2%, due to the inclusion of the merged UASC business, Hyundai Merchant Marine (HMM) was the biggest gainer in Q3.

The restructured South Korean carrier recorded a 41.1% increase in its liftings compared with 2016, to 1.05m teu, ranking it as the eighth biggest container line in Alphaliner’s league table.

Nevertheless, all the carriers could be relegated by one place if MSC, second only to Maersk Line in terms of deployed capacity, was to disclose its liftings.

The privately owned MSC, has always declined to reveal any operational or financial numbers. However sources suggest that it could have carried close to 6m teu in Q3 as it benefited from its 2M alliance relationship with Maersk.