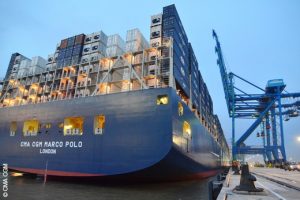 CMA CGM recorded a net profit for 2017 of $701m to easily outperform its peers and wrench the mantle as the industry’s most profitable global container line from Maersk Line.

And the French carrier’s order of nine LNG-powered 22,000 teu ultra-large container vessels (ULCVs), confirmed in November, is a bold step to out-think on cost competitiveness its Danish rival, currently preoccupied with its own restructuring.

CMA CGM’s strategy is to take advantage of the up-coming 2020 IMO’s 0.5% global sulphur limit on bunker fuel, which many in the industry consider to be a game-changing event in liner shipping, given the higher cost of low-sulphur fuel or the significant cost for the installation of exhaust gas cleaning scrubbers.

Last month, Maersk Line posted a net profit of $521m, failing to reach its target of a turnaround of $1bn on a loss of $384m in 2016 when its bookings were stymied by a cyber attack and a disappointing final quarter.

CMA CGM lost $452m in 2016, which included only a six-month contribution from APL, hence year-on-year comparisons are somewhat skewed.

And while the number of containers carried by the CMA CGM group leaped 21.1% to 18.95m teu last year, on a like-for-like basis including APL, there was a jump of 10.9% in fourth quarter numbers to 4.93m teu.

This was particularly impressive, given the industry average of a 5% expansion last year.

Although CMA CGM’s improvement in its average revenue per teu at 8% was not as good as Maersk’s, which came in at 10%, this does not necessarily point to a market share grab underpinned by a strategy of heavy discounting, according to Lars Jensen, chief executive and partner at SeaIntelligence Consulting.

“CMA CGM’s average revenue per teu did not grow quite as much as Maersk’s, but the difference is relatively small and clearly shows that the volume growth has not primarily been driven by pricing action,” said Mr Jensen.

Commenting on the financial result, CMA CGM chairman and chief executive Rodolphe Saade said: “Quarter after quarter, CMA CGM demonstrates its ability to outperform its peers and these annual results confirm our group’s position as a leading player in the container shipping industry.”

CMA CGM attributed its performance last year to “the quality of the Ocean Alliance service” and specifically the transpacific market where it claimed CMA CGM and APL brands “are particularly strong”.

Mr Jensen identified CMA CGM’s year-on-year 14.4% increase in fleet capacity in the fourth quarter to 2.53m teu, as the carrier’s “only potential operational weakness” given that it was “significantly higher than the 10.9% growth in volumes”.

However, he noted that as the carrier does not provide transparency on volumes carried per tradelane it was not possible to analyse the numbers in detail.

It is currently the third-ranked carrier, behind Maersk and MSC, with a fleet of 2.5m teu and an order book of 305,000 teu.