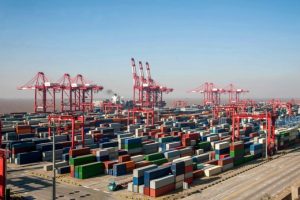 As container spot rates on the Asia-North Europe trade continue to slide, CMA CGM has announced a reduction in FAK rates.

With demand remaining weak post-Chinese new year, several forwarders have told The Loadstar they have been offered rate discounts in the past two weeks to switch carrier.

UK-based NVOCC Westbound Logistics has suggested carriers are aggressively competing for market share following the introduction of new 22,000 teu ships on the route and is expecting further reductions.

Interestingly however, the recently merged Japanese carrier Ocean Network Express (ONE) continues to publish FAK rates which, at $1,600 per 20ft and $3,100 per 40ft, are substantially out of kilter with competitors.

The bellwether Shanghai Containerized Freight Index (SCFI) recorded another dismal week for Asia-Europe carriers. Spot rates for North Europe tumbled a further 5.2% to $585 per teu and have now fallen by $300 since the beginning of the year, which will be causing alarm bells to ring in the boardrooms of major carriers.

Moreover, the freight rate slide is happening at the same time as carriers are suffering rising bunker prices and a range of other inflationary pressures, including a big spike in ship charter rates.

For Mediterranean ports, the spot rate decline was not as big, at 2.6% to $600. The reason is said to be due to additional demand as a consequence of the Maersk Honam fire and general average delay – the vessel was on an Asia-Mediterranean loop – shippers having to replace and rebook cargo from many of the 7,860 boxes involved.

Elsewhere, there was welcome improvement in spot rates from Asia to the US as carrier negotiators sit down with shippers to finalise new annual contracts beginning 1 May.

Nevertheless, spot rates for the west coast are still around 15% lower than a year ago, and for the east coast some 7% below, which makes carrier negotiators’ task of securing increases, or even maintaining current rate levels, particularly challenging.

But there was some good news for carriers in secondary trades this week – SCFI reported rates to the South American east coast up 22.7% to $2,094 per teu following rate volatility in the wake of alliance restructuring due to Maersk’s acquisition of Hamburg Süd. The jump enabled the SCFI’s composite index to edge up by just under 1% this week, although it is still around 18% lower than 12 months ago.