Analysis: K+N needs to find some courage and a new corporate plan 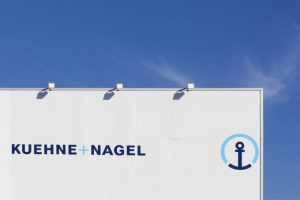 Six months ago, I predicted value destruction was on its way for Kuehne + Nagel, and it has turned out to be one of those rare occasions when I was right on target.

Lady Luck played a part in that call, although certain ominous signs were there for most of us to see.

K+N On a slow path to value destruction?

The subsequent fall in K+N stock was hard to swallow for shareholders, who must feel perplexed, to say the least. Other investors in shipping circles who decided to bet on asset-heavy supply chain operators are not much better off, as I also expected (my previous remarks are highlighted in red above, while the picture below should be self-explanatory).

With the stock of K+N down 18% since a record high of Sfr181.8 earlier this year, it is obvious to ask what contributed to that drop, in terms of fundamentals, although the considerations that follow here are also driven by my personal concerns about the lack of proper engagement/communication between executives and the investor community.

This is an oft-overlooked aspect in the value-creation process, but perhaps the most important. The corporate story of K+N could be brought to the public in many ways, yet management decided to be picky when they disclosed annual results last week.

It is a shame, because K+N currently is a peculiar equity story in a rather unfashionable way – I gather it is not fully trusted by growth investors, while value investors are uncomfortable because of the risks that any growth story carries.

Its annual results confirmed what most of The Loadstar readers surely expected. Revenue growth was outpaced by growth in the direct costs of moving freight, and although it tightened the belt on operating expenses (mainly personnel and SG&A – ergo bills, rent and so forth), slightly higher D&A items and other amortisation plans knock precious basis points off underlying earnings, which suffered and came in below consensus estimates.

Inevitably, pressure on core margins makes the payout less sustainable beyond this year, despite plenty of financial flexibility granted by a solid balance sheet. K+N is near-debt free, which is a good sign when value is released, but could easily be a drag when cheap funding is available but companies don’t exploit a benign credit environment. It is worth adding that KN is a key client for banks and could secure advantageous terms on any kind of debt – by size and type – should it ever decide to raise any.

This stands regardless of the direction of interest rates, although the low interest rate environment might soon be over.

Writing on the wall

The remarks of chief financial officer Markus Blanka-Graff (pictured below), in particular, drew my attention, because although K+N is well regarded in the industry its own analysis is questionable when events do not play out according to plan – “plan” here, of course, was too meet analysts’ estimates, which it missed by some margin as far as underlying operating earnings were concerned, despite rising volumes.

A buoyant business, in fact, is a problem for the middle-man these days: rising volumes continue to impact yields (which means that analysts’ K+N EBIT growth estimates for 2018-2020 are seriously at risk, by the way), although performance in air was respectable, recovery in ocean was visible, while overland and contract logistics fared decently.

The overall picture remained mixed but encouraging, at least until I spent a bit of time trying to make sense of Mr Blanka-Graff’s observations.

“2017’s start was enormously difficult, in an enormously difficult market, and we started on the left foot,” he noted on a call last week. “Despite this, we ended the year Sfr20m up on the previous year – whether this is big or not, I leave to you.”

That is a fair assessment of the situation in principle, I thought – the stock had rallied so far beyond fair value that the problem was always meant to be managing expectations, rather than delivering the goods.

But what followed was a more surprising for somebody like me who has spent most of his working life crafting excels and cross-checking how management teams communicate their achievements to investors.

After discussing the challenges that K+N had to face in the first half, Mr Blanka-Graff said: “So, as a comparison with 2016, it is important to look at the performance achieved in the second half. It is also important to note that during the last 12 months we have acquired four new companies, and by the end of the year, these will be integrated.”

Wait, what? It took DSV just barely two years to integrate a $1bn target – US-based UTi Worldwide – and had K+N spent a significant amount of money, say over $500m, I’d have noticed. In fact, the amount budgeted for M&A was much, much lower than that in 2017.

As a reference, barring regulatory hurdles it would be fine for a deal worth $500m to take up to 18 months to be considered “done” at a first stage of integration (that is to say when most synergy targets are achieved), but K+N spent just over $100m last year.

In fairness, it must consolidate four targets, which adds complexity to the mix.

Well, I’ll leave you to decide what to make of it, but here is my take: K+N invested one-tenth of DSV in deal-making in the 2016-2017 period; it then predicted it would wrap up four tiny deals (full details in the tables below) in 14-20 months, while DSV in contrast completed a more challenging task in less than eight quarters, doubling its market cap during the process, and now is looking for a $2bn-plus deal.

Alternatively, look at XPO Logistics and its 100% capital appreciation in the past 12 months; +330% since it acquired Con-way in late 2015 – in just over two years it invested 65 times the amount that K+N shelled out for acquisitions last year.

XPO completed its takeover of Norbert Dentressangle in mid-2015, and soon after it took Con-way off market, investing about $6.5bn in the process.

By comparison, the stock of K+N, the largest ocean and air freight forwarder worldwide, is trading close to mid-2011 levels and under the stewardship of chief executive Detlef Trefzger and his team it has appreciated only 4.5% a year in one of the longest bull markets in human memory.

The company is devoting more than available free cash flow to dividends, which I think is a rather short-sighted capital allocation strategy – although perhaps justified by its shareholding structure.

Meanwhile, its institutional take and public view on M&A matters are simply unacceptable, having recorded cash outlays of barely Sfr107m in 2017, while allocating peanuts to strategic stakes – all this came at time when operating cash flows were under pressure, capex was essentially flat, but cash balances were impacted, while receivables surged.

M&A is not K+N’s bread and butter, and of the many virtues its team of analysts and advisors might have, courage doesn’t appear to feature among them. It may be argued that this is typical in some Swiss companies, but it could well be time to give the financial markets a different message, such as a new corporate plan for 2019-2020.

How about a radical shift in strategy and communication?

A mix of buybacks, M&A of between $1.5bn and $2bn, possibly accretive to earnings (as opposed to what we saw in 2017), and a more conservative – but faster growing – payout are the corporate tools it could intend to deploy, and I would argue would be in the best interest of all our stakeholders, and will drive sustainable shareholder value for years to come.

This is very close to what DSV is doing, and it is something the market would love to hear from K+N, too. If it doesn’t work out this way, you can safely blame its shareholding structure.