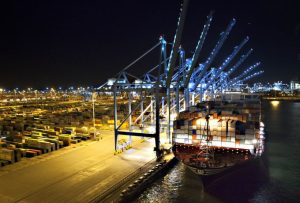 An increase in container traffic boosted an otherwise poor first quarter for the port of Rotterdam, with overall volumes falling 1.2% year-on-year.

Although non-containerised freight volumes dropped, the number of boxes passing through the Dutch gateway ticked up 6.1% to 3.5m teu.

This number is some 1m teu ahead of neighbouring Antwerp, but the rate of growth was far slower than the Belgian port’s 10.7% increase reported last week.

Chief executive of Rotterdam port authority Allard Castelein said: “The continued growth in containers is a confirmation of our increasingly important position in the maritime connection networks of large shipping alliances.

“We are seeing somewhat more measured growth after the significant growth last year, and this is entirely in accordance with our expectations.”

In a statement, the port pointed to the restructuring and amalgamation of the three shipping alliances as having had a positive impact on container volumes.

One industry source noted container growth at both Antwerp and Rotterdam was likely coming at the expense of Hamburg, which reports its first quarter numbers on 14 May.

“Following the restructuring, the alliances have focused their attentions on Antwerp and Rotterdam to the detriment of Hamburg,” the source told The Loadstar.

“The German port obviously had issues with deepening the Elbe. Carriers are looking to maximise volumes and the draught prevents larger ships calling at Hamburg.”

The statement from Rotterdam went on to note that increased concentration of cargo had also bolstered feeder volumes. These, the statement claimed, were up 7.5% – described by the port as a “significant” increase – to 0.6m teu over the first three months.

“Feeder vessels transport containers with intercontinental cargo to and from other ports that are not visited directly by intercontinental (deepsea) services,” the statement added. “An increasing exchange is also occurring between deepsea services, enabling carriers to offer more combinations between loading and unloading ports in Asia and Europe.”

New connections into the eastern Mediterranean also led to a 6.9% increase, to 0.7m teu, in shortsea throughput over the three-month period.